Today is Thiruvadhirai or Arudhra Darshanam
In TamilNadu this day celebrates the cosmic dance of Lord Shiva, which is represented by the Nataraja form . People take the blessings of Lord Shiva as Arudhra is also the birth star of Lord Shiva .

Shiva as “Natraja ” is the Lord of dance &
as “Adiyogi ” is the Lord of Yoga
Both the art forms of yoga & dance need good footwork and balance for graceful postures. The yoga pose by name “Natrajasan ” & an important ornament for any dancer the ” ghungroo” are part of my artwork today. 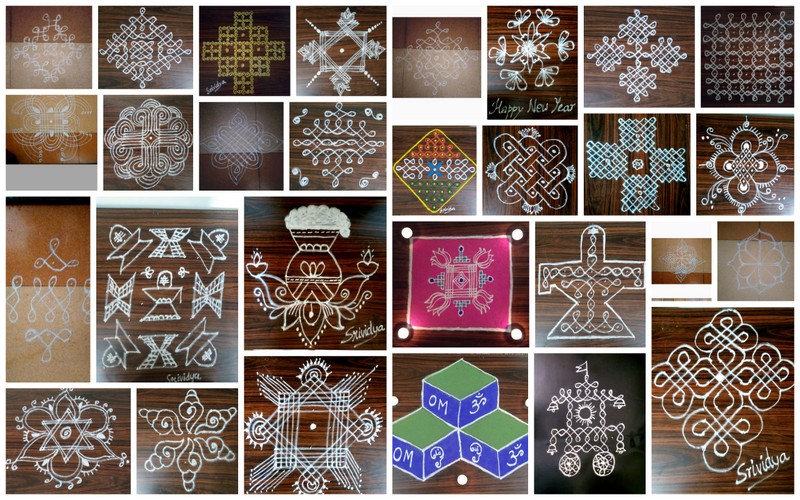 Today after a year when I was looking at last year’ s Margazhyi kolams I felt nice that there is an improvement . The first thing that came to my mind is the saying that I have heard my Amma say. ” paada paada ragam, mooda mooda rogam, ezhadu ezhadu ezhatu, thakai Thakai  Thayhil, padika padika padippu.”
In a nutshell it means practice,  practice,  practice is what is required to improve in any sphere.

The festival of Arudra Darisanam also called Thiruvadirai . It is connected with the cosmic dance of Lord Shiva as Nataraja in Tamil month of margazhyi on the Full moon day.
Special pujas and rituals are done at the Chidambaram Nataraja Temple in Tamil Nadu
Shiva Carries a (trishul) trident, a damru , has serpents around his body, he is pleased when bilva leaves are offered to him. The bilva leaves are green in colour and three in a stalk resembling the trishul . Om namaha shivaya is a mantra associated with Lord Shiva.

Day 25: I have drawn a A radial kolam on the festival day
of ” Thiruvadirai” .
My kolam has a trishul, Om, damru , the three horizontal stripes of viboothi that a Shiva devotee wears ( Ravana was a staunch devotee of Shiva) and the third eye of Lord Shiva in the centre along with the bilva leaves at the top on either side of the kolam .
I have excluded the serpent as I am very scared of their sight.